Climatic and Biotic Events of the Paleogene (CBEP) Fall 2017

Since 1989 the CBEP conference series has brought together a broad spectrum of researchers – stratigraphers, paleontologists, geochemists, and climate modelers – to share and discuss the latest and most innovative ideas about Paleogene Earth systems.

CBEP 2020 in Bremen (Germany) will be the next instalment of this series.

Past and future venues for CBEP meetings (* Greenwood lab presentations):

“The Paleogene Period was a time of extremes and transitions. Bounded by the catastrophic extinction of the dinosaurs and the rise of modern grasslands, the world of the Paleogene was characterized by climatic conditions largely unfamiliar to us today but saw the rise of essentially modern continental configurations, biotic communities, and biogeochemical regimes.

Understanding the function of these systems under global greenhouse conditions that may approximate Earth’s climatic future is intriguing both for what it can tell us about our past and for the hints it may provide about our future.”  Gabe Bowen & Pete Lippert.

Dr. Greenwood was a member of the Scientific Steering Committee for CBEP 2017 and is again for CBEP 2020. 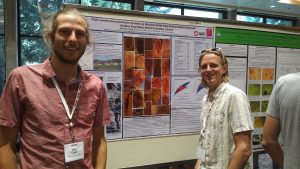 Former MSc student, Alex Lowe at his poster with one of the 2 CBEP 2017 organisers, Dr. Gabe Bowen from the University of Utah. 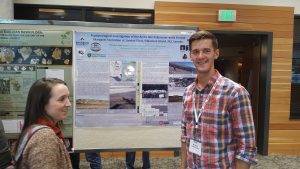