Turtle Mountain is a plateau 600 m above sea level, 90 m to 120 m above the surrounding countryside, extending 32 km from north to south and 64 km from east to west along the Manitoba-North Dakota border. It is the only area in Manitoba where Cenozoic sediments can be found in outcrop. Early Paleocene marine shales and terrestrial mudstones and coals are found exposed in stream-banks and ravines on the western flank of Turtle Mountain, along Hwy 21 (see map below: Map © D.R. Greenwood 2008).

Manitoba’s only commercial coal operations were developed following discovery of lignite near Turtle Mountain in 1879. Production began in 1883 with the opening of the Lennox mine and continued intermittently at the Voden, McArthur, McKay, and Manitoba Coal Company mines until 1908. Coal was extracted from outcrops in ravines and from shallow shafts. Its availability spurred settlement while offering supplementary income to local farmers. The construction of railways introduced competitive Saskatchewan coal and commercial production around Turtle Mountain was suspended. Interest in mining was revived during the Depression because Turtle Mountain lignite was cheaper than higher grades. At its peak, annual production of the McArthur, Henderson, Deep Ravine, Salter, Powne, and Deloraine Coal Company mines averaged over 1000 tons each. The wartime labour shortage and changed economic conditions forced the last mine to close in 1943. [excerpted from MB Heritage and Bannatyne 1978 & 1979].

Several Paleocene macrofloras are relatively well known from the Williston Basin in southern Saskatchewan, associated with lignite seams and mudstones in the Cypress Hills and also along the Souris River near Estevan (McIver 1999; Frank & Bend 2004). However, very little is known about plant fossils of this age from further east. Conifer shoots of Sequoia (redwood), Taxodium (bald or swamp cypress) and Cladophlebis (indeterminate) from outcrop of the Goodlands Member of the Turtle Mountain Fm. near Goodlands in south-western MB, and rare leaf impressions collected from a single exposure of the Peace Garden Mbr. (Bamburak, 1978 & pers. comm., 2005 & 2010) are the sole record of Paleocene age plant macroflora from MB. These fossils were associated with the Paleocene lignites formerly mined in the Turtle Mountain area (Wickenden 1945; Bamburak 1978). Since their original discovery, the southwest Manitoba plant fossil floras have remain unstudied, although a core intersecting these sediments was studied for a pollen-based stratigraphic study that only provided limited palaeoenvironmental inference (Braman & Sweet 1999). Lignites similar to those in the Goodlands Member from SK have yielded plant leaf cuticle (McIver 1999) and/or had their palaeoenvironment reconstructed using fossil pollen (Frank & Bend 2004).

The Early Paleocene coals from the Souris Mire in Saskatchewan were interpreted by Frank & Bend (2004) as being formed by cycles of different plant communities, culminating in a conifer-dominated swamp forest containing ferns, shrubby angiosperms and relatives of the living swamp cypress (Taxodium spp., as the TCT pollen-type) of the southeast USA. 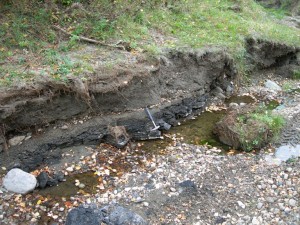 In 2005 and 2007, samples of lignite from the Goodlands Mbr were collected by David Greenwood and his undergraduate palaeobotany class from stream-bank exposures and from the abandoned Henderson Mine near Goodlands MB, and sent to Art Sweet of the GSC in Calgary for processing. The microflora from the stream-bank samples was assigned by Art Sweet to the Early Paleocene Tricolporopollenites kruschii Zone of Braman and Sweet (1999). The microflora was studied by Greenwood Lab Honours students Mackenzie Desautels (2010-2011) and Nidhi Patel (2020-2021), using facilities in the Environmental Science Laboratories to:

Based on the presence of diagnostic dinoflagellates, most of the younger Peace Garden member is marine in origin, as are most of the shales and sandstones of the coal-bearing Goodlands member (Kurita & McIntyre, 1995; McIntyre, 1999). Rare leaf impressions have been collected from a single exposure of the Peace Garden Mbr. (Bamburak, 1978 & pers. comm., 2005 & 2010), on the NW flank of Turtle Mountain, in the headwaters of West Medora Creek, indicating some shallow inshore facies. The coals and associated mudstones represent transient terrestrial swamp environments at the margins of of an intercontinental seaway. Early work on the coals (Sweet, 2005 and C.L. Greenwood & K. Stouffer, unpubl.) has identified numerous mosses (e.g. Sphagnum spp.), ferns and other pteridophytes (incl. Lycopodium, Gleicheniaceae, Polypodiaceae and Schizeaceae), Sequoia, Taxodium relatives (as TCT pollen), Pinaceae (bisaccates, likely part of the regional pollen rain), Ginkgo, Juglandaceae (walnut-hickory family, as Caryapollenites and Momipites spp.), Betulaceae (birch family, incl. Alnus spp.), Ericaceae, Ulmaceae and Aquifoliaceae (as Ilexpollenites sp.). Some of these are illustrated below.

In his assessment of the palynofloras, Art Sweet noted that the presence of Momipites microfoveolatus, Tricolporopollenites kruschii (= Margocolporites cribellatus), and rare occurrences in some samples of Wodehouseia fimbriata in the palynoflora were consistent with an Early Paleocene age assignment (Sweet 2005). Some samples were assigned by Sweet (2005) to the late Early Paleocene Tricolporopollenites kruschii Zone of Braman and Sweet (1999). A truncated stratigraphic diagram can be found here. These results were corroborated by the work of Desautels and Patel (Patel et al. 2022 in review).

A short section was cut near the creek exposure on a tributary of Boundary Creek in September 2007 near the original sample sites, and samples processed at the GSC in Calgary. This section revealed 2 small coal seams, separated by a mudstone unit, with the basal coal (at creek-bed level) quite woody. Palynological analysis of these samples is to be published in a paper under preparation (Patel et al., in review).

As part of Mackenzie Desautels’ Honours thesis project we revisited a number of old coal-mining sites with Jim Bamburak formerly of the MB Geological Survey. A total of 3 adits were found, representing the Deloraine Coal Co. mine (on the East Branch of Medora Creek), and a site on a tributary of Boundary Creek that may be the Powne or Deep Ravine mine. An exposure of the Peace Garden member, which is stratigraphically higher than the Goodlands member, was also visited. This exposure has previously yielded leaf impressions. The sites were palynologically analyzed as part of Mackenzie’s and Nidhi’s research, assisted by Art Sweet (deceased) and Jen Galloway of the GSC. 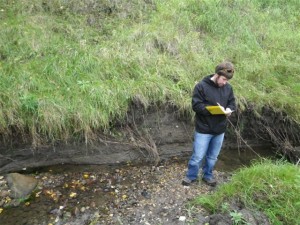 We thank Jim Bamburak formerly of the MB Geological Survey and both Dr. Rong-Yu Li and Peter Adamo (BU Geology Dept.) for their assistance in finding the coals in outcrop, and the BU Palaeobotany classes of 2005, 2007, and the class of 2009. Initial pollen counts were provided by Sweet (2005) and K. Stouffer (unpubl.), the latter during a NSERC USRA project with Dr. Greenwood in 2008. The palynoflora of the section was thoroughly documented by Nidhi Patel for her Honours thesis in Biology at BU. Pollen photography was by C.L. Greenwood, Palynology Research Assistant in the BU Environmental Science Laboratories. 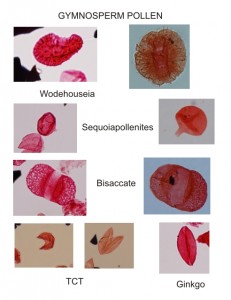 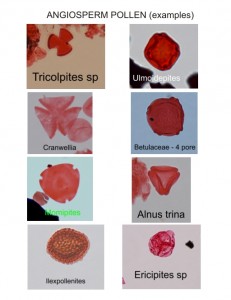 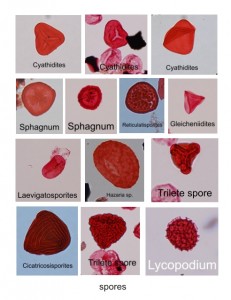 All images taken by C.L. Greenwood on either an Olympus BX41 or BX51 microscope in the BU Environmental Science Research Laboratory. 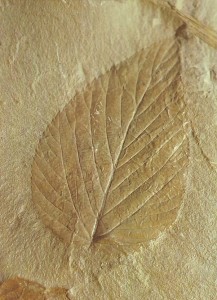 The leaf is likely Ulmus (elm).

NB: Hyperlinks take you to the ‘free to view’ abstract of the article on the NRC Press website. Access to the full article depends on your personal or institutional access rights or subscriptions to NRC Press online materials.