Note: This is a random sample of the type of multiple choice questions that will be on the exam. None of these questions may actually appear on the exam. Do not use this as your primary means of studying or otherwise preparing for this test.

A) is behavioral analysis

2) The scientific method is described by which of the following?

A) the application of complex theory

B) a relation to procedures developed by Galileo

C) the development of hypotheses for testing and prediction

3) Which of the following is an example of a system?

B) a river drainage basin

D) All of these are examples of systems

E) None of these are examples of systems

4) Which of the following is true of models?

A) they are concrete representations of the world

B) they are exact representations of the world

C) they are simplified representations of the world

D) they cannot be used to measure real world phenomena

E) because they are small, they cannot accurately reflect reality

5) According to the text, the three inorganic Earth realms are the

B) hydrosphere, lithosphere, and atmosphere

7) A parallel of latitude

D) is a line which passes through both poles

E) is called a meridian

A) a large scale map

B) a small scale map

10) A geographic information system (GIS) is capable of which of the following?

A) data measurement and collection

11) The Sun produces which of the following?

B) mainly ultraviolet and X-rays

D) only radiant energy that is beneficial to life

B) are phenomena that occur only at the equator

C) are responsible for the seasons

D) are factors that follow an irregular, random cycle

E) are controlled by the longwave energy output at the poles

14) Which of the following is true regarding Earth’s axis?

B) the axis remains parallel to the plane of the ecliptic

C) axial tilt is unrelated to the phenomenon of seasonal change

D) the axis is tilted 23.5° and remains parallel to itself as it revolves around the Sun

15) With reference to the figure below, the longest day of the year in the northern hemisphere occurs at 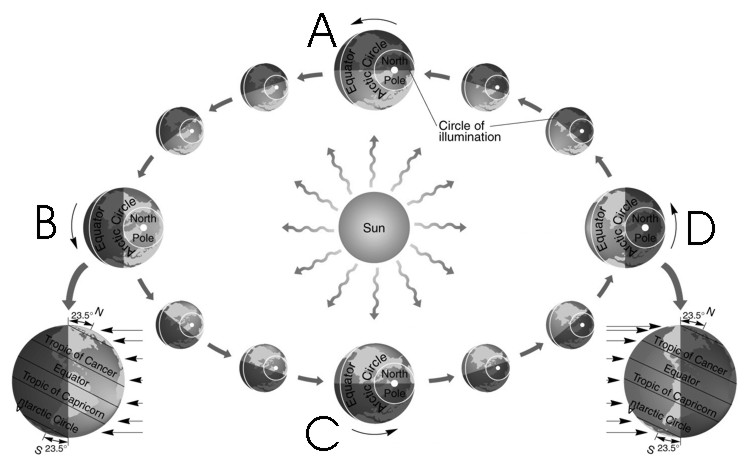 17) Temperatures within the stratosphere

A) decrease with altitude according to the normal lapse rate

B) remain about the same from the tropopause to the stratopause

C) increase with altitude because of the absorption of ultraviolet radiation

D) decrease with altitude due to radiation losses

18) If a surface absorbs insolation,

A) its temperature increases

B) its temperature decreases

C) its temperature is unaffected

19) When water evaporates, the energy that was used to evaporate the water

A) is stored as sensible heat in the evaporated water

B) is stored as latent heat in the evaporated water

D) is conducted into the underlying layer of water

E) is convected into the atmosphere