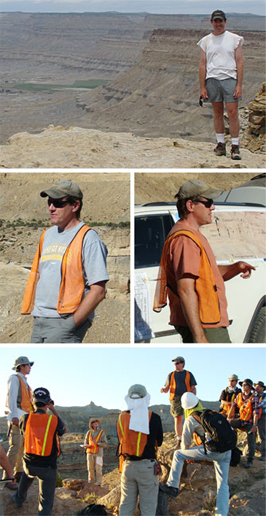 Dr. Simon A.J. Pattison completed his undergraduate geology degree at Brandon University in 1985.  He then went on to McMaster University, where he finished his M.Sc. (1987) and Ph.D. (1991) degrees in Geology. Following grad school, Simon was hired as an Exploration Geologist by Imperial Oil Resources Limited in Calgary where he worked until late 1992 before being recruited into a two-year, Shell International-sponsored Senior Research Fellowship based at the University of Aberdeen, Scotland. This fellowship not only paved the way for Dr. Pattison’s introduction to the Cretaceous Book Cliffs strata of Utah and Colorado, but also lead to Simon being hired as an Expatriate Geologist within the Shell International Group of Companies. Dr. Pattison worked as a Production/Reservoir Geologist in The Netherlands (1995), and was later transferred to Nigeria to work as a Senior Production Geologist (1996-1998). In December 1998, Simon returned to his hometown of Brandon and joined the Department of Geology as an Assistant Professor. He was awarded Tenure in December 2000, promoted to Associate Professor in January 2002, and promoted to Full Professor in March 2009. Simon has been acknowledged for excellence in both teaching and research at BU. He was awarded the Alumni Association Excellence in Teaching Award in 2001, the Senate Award for Excellence in Teaching in 2004, and the Senate Award for Excellence in Research in 2009.

Dr. Simon A.J. Pattison specializes in reconstructing ancient environments, especially those from the Cretaceous of western North America. This naturally occurring “greenhouse” period was a time when the dinosaurs reigned supreme, the western interior of North America was flooded with sea water, and global sea level was approximately 200 m higher than what it is today. Dr. Pattison studies sedimentary rocks in order to unravel the physical and biological characteristics of ancient depositional environments. This work leads to a better understanding of environmental change through time, including sea level change and climate change.

Dr. Pattison’s main areas of specialty are marginal to shallow-marine clastic sedimentology, sedimentary architecture, sequence stratigraphy, reservoir modelling, and ichnology.  His 20+ years of experience encompasses both outcrop and subsurface based projects, including the Cretaceous Book Cliffs of Utah and Colorado, Cretaceous Cardium and Viking formations of Canada, and the Tertiary Niger Delta.  In addition, Simon has over 6 years of direct industry experience with Esso Canada, Shell International Netherlands, and Shell Nigeria, where he worked as an exploration, production and reservoir geologist.

Dr. Pattison continues to actively research the Cretaceous strata in Utah and Colorado as demonstrated by peer-reviewed journal articles, and numerous oral and poster presentations at international conferences. He has received widespread and diverse support for his research, including awards from NSERC, CFI, ConocoPhillips-Houston, Shell International-Houston, and Tundra Oil and Gas-Manitoba.  Ongoing research projects include: (i) Prediction and Realistic Modelling of Channel-Shallow Marine Environments, and (ii) Origin and Internal Architecture of Offshore Mudstone Belts.

Dr. Pattison teaches a wide variety of undergraduate geology courses at BU, from first year Physical/Historical Geology to fourth year Petroleum Geology and Facies-Basin Analysis.  A full list of Simon’s active teaching is given below:

Dr. Pattison also teaches a wide spectrum of industry, government and university-based professionals during geological field seminars to the Book Cliffs region of Utah and Colorado. These seminars are intensive training courses that combine daily teaching sessions at outcrop localities with late afternoon and early evening classroom lectures and exercises. The main goal of these field seminars is to train a variety of professionals on the sedimentology, sequence stratigraphy, three-dimensional sedimentary architecture and prediction of shallow-marine to marginal-marine sandstone reservoirs, so that they can improve and optimize their geological models of the subsurface. Participants are from a variety of backgrounds including exploration geologists, seismologists, production geologists, petrophysicists, reservoir engineers, production engineers, managers, government officials, geology professors, post doctorate research fellows, and government survey geologists. Simon has been leading these applied geological field seminars to the Book Cliffs region since the early 1990s and has successfully trained over 600 petroleum industry professionals from Africa, Europe, North America, South America and Asia. These rocks are important outcrop analogs for fluvial, deltaic and shoreface-to-shelf hydrocarbon reservoirs worldwide.