Professor of Mathematics and Chair of Department 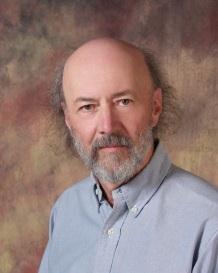 My teaching interests range from introductory statistics and linear algebra to 4th-year topology—with courses such as calculus and functions of complex variable in between. Most recently, I have been teaching:

For a whimsical view on mathematics see my Mathematics & Physics board on Pinterest.

My doctoral studies were at the University of Birmingham, in England, and were concerned with applying algebraic topology to a problem that arose from introducing quantum mechanical spin into nonlinear classical field theories. The ideas extend to Einstein’s theory of gravity, General Relativity, where the topological aspect comes from how light travels on the surface of a cone and from the fact that the axis of the cone can twist as one moves through spacetime—just as the rungs of a rope ladder can twist and point in various directions. In general relativity, these twists are called kinks. Their existence was first proposed by two Americans, David Finkelstein and Charles Misner.

In collaboration with Mount Saint Vincent University relativist, Tina Harriott, I studied the properties of relativistic kinks in a variety of spacetime dimensions, including the usual 3+1 (where 3 refers to the number of space dimensions, and 1 refers to the single time dimension) , and also simpler situations in 1+1 and 2+1 dimensions. Our work is summarized in our review paper titled ‘Degree of mapping for general relativistic kinks,’ Nuovo Cimento B 120, 915–930 (2005).

One of the most exotic ideas in science—that of time travel—requires the light cone directions to undergo a twist that is in some ways similar to a kink. For a fun overview, see my article titled ‘Groundhogs, gravity, and loops through time,’ which appeared in the webzine Ecclectica. 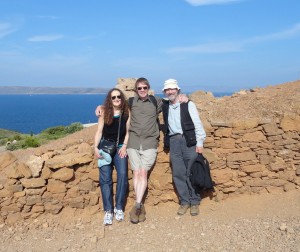 Jeff Williams and colleagues, Tina Harriott and Steve McCarthy, take a break at Cape Sounion during the Athens mathematics conference.

Currently, my collaborator, Tina Harriott, and I are working on a new approach to general relativity that was pioneered by Ted Newman of the Pittsburgh relativity group.

In this approach, the usual spacetime metric is discarded and the theory is formulated in terms of the surfaces on which light itself is travelling. (Back to the idea of the light cones!). This way of doing general relativity is called the Null Surface Formulation (NSF).

We presented one of our solutions of the NSF equations at the conference Relativity and Gravitation–100 Years after Einstein in Prague, which was held in the Czech Republic. A printed version of the presentation is scheduled to appear in the proceedings. We have published a more general result titled ‘Solution for the null-surface formulation of general relativity in 2+1 dimensions,’ in the journal General Relativity and Gravitation, volume 46, issue 2 (2014). 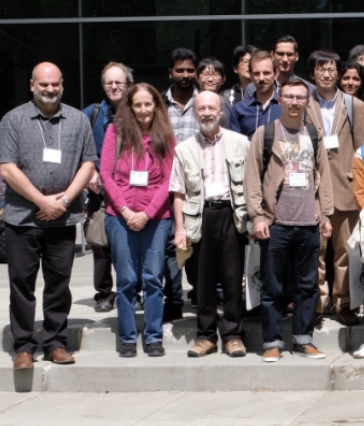 Later, we found another, more complicated, solution that corresponded to a universe sourced by a scalar field (similar to the Higgs’ field). We published this solution under the title ‘Three-variable solution in the (2+1)-dimensional null-surface formulation,’ General Relativity and Gravitation, volume 50, issue 4 (2018).

We gave a talk on the above solution and on the (2+1)-dimensional null-surface formulation in general at the Joint Canada-Asia Pacific Conference on General Relativity and Relativistic Astrophysics, held at the University of Alberta in Edmonton, Alberta, Canada, 25–29 June 2018. See the photograph on the left.

Another solution soon followed. This one was the most complicated of the three and it described a spacetime with a curvature singularity, as would occur at the beginning of the universe or at the centre of a black hole. We published this solution under the title ‘Petrov type-N solution for the null-surface formulation in 2+1 dimensions,’ General Relativity and Gravitation, volume 51 (2019).

I am a member of the Winnipeg Institute for Theoretical Physics and of the International Society on General Relativity & Gravitation. 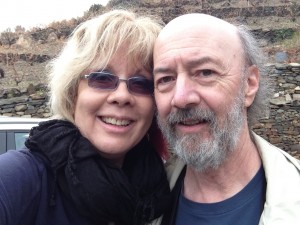 Edith-Mary Smith and Jeff Williams at the home of French sculptor, Aristide Maillol, on the Banyuls-sur-Mer World War II escape route to Spain.

Hiking, travel, art, and anything connected with World War II, have always been my passion. I once combined all four when my wife and I visited the home—really a museum—of French sculptor Aristide Maillol. The old stone building sits in the foothills of the Pyrenees, astride the hiking trail that Spanish refugees used to escape the Franco regime in the late 1930s. In the early 1940s, it was used again by French refugees and Jewish families fleeing Nazi-occupied France.

Did I mention writing?

I was a member of the latter, and on one occasion joined forces with an alumnus and a student from the general studies program to write a screenplay for a space-age TV mini-movie based loosely on Macbeth. The movie’s popularity fell short of Star Wars, but it aired throughout southwestern Manitoba and (because of the computer graphics) it saw several screenings as part of the first year course, 62.163 Computers & the Modern World. 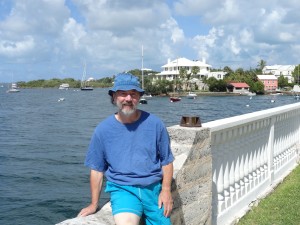 Jeff Williams at the Hamilton Princess in Bermuda, centre for British intelligence cryptography and censorship during World War II.

As far as writing goes: I like fiction—both reading it and writing it. My latest short story Coffee with Luna struggles with the possibility of campus romance being derailed by social media. It was recently published by Alfie Dog Limited and is also available in paperback as part of the short story collection Came as Me, Left as We. 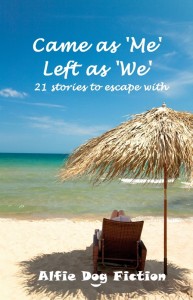