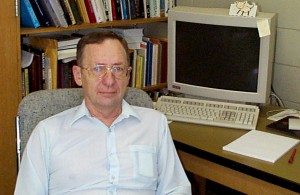 In my personal life I have a wonderful wife Barbara (Shaw) who has looked after me since we were married in 1964, the same year we both graduated from the University of Western Ontario. After she raised our children, Barbara became a high school teacher and part time university instructor (with her master’s degree). We are proud of three daughters. Cynthia with husband and two children in Ottawa, Shahna (now deceased to our great grief) with a husband and son in Brandon and Sherri with her husband and a son in Winnipeg.

In my former professional existence, I taught courses covering everything from introductory astronomy through digital electronics and other senior physics courses. I even taught, on occasion, acoustics for music students. Since September 2005 I have been retired from teaching and research and now hold an Emeritus Professor position at Brandon University.

The research in which I have specialized is the reconstruction of the images (temperature maps or abundance maps) of stars. Stars cannot be seen as a disk (the way we see our Sun) through a telescope of any size. Indirect techniques such as interferometry or Doppler imaging must be used to reconstruct what a star would look like if we could see it from within its own system or to map the distribution of element abundances over its surface. Doppler imaging is explained briefly in my vitae section but here you may view a video of the map of oxygen over the surface of the star epsilon UMa (Alioth), the star in the handle of the Big Dipper that is closest to the bowl. An interesting contrast is the video of the oxygen distribution on the star theta Aur where the magnetic field is much stronger and more complicated. Many more images of spotted stars are displayed and explained in the following sections.

My research involved collaborations with faculty at other universities such as Bill Wehlau of the University of Western Ontario (now deceased) and Klaus Strassmeier and associates of the Astronomical Institute of Potsdam (now the Leibniz Institute). The work has required travel to observatories such as the Canada-France-Hawaii telescope on Mauna Kea in Hawaii, the Dominion Astrophysical Observatory in Victoria or to Cerro Tololo in Chile.

In addition to teaching, committees and research at Brandon University I served on a number of professional national organizations. I was a member of the senior Council of the Natural Sciences and Engineering Research Council (the national natural sciences granting agency) in the late 1980s and early 1990s. I was a member of the Time Allocation Committee for the Canada France Hawaii Telescope and of the Herzberg Institute of the National Research Council’s Advisory Board for three-year terms following that appointment. Later, in the early 2000s, I was secretary of the Canadian Astronomical Society (professional body). In retirement I have a number of interests including activities with a local animal rescue organization called Funds For Furry Friends that was begun by our daughter Shahna and with the Brandon Kiwanis Club.