You’re a stinker who writes garbage about people,” an audience member told Mordecai Richler after he gave a speech at a Montreal synagogue. Partly true. Richler was rarely afraid to speak his mind, even when it meant uncovering and mocking the darker motives that drive us. Yet he’s one of the greatest writers this country has produced, a 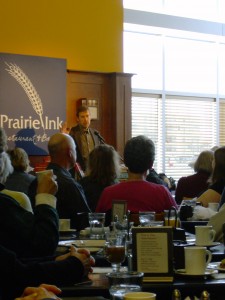 n unequalled poet of the colloquial.

My interest in Richler began as a university student, when I first opened the very funny Apprenticeship of Duddy Kravitz. I partly relied on Richler’s novels for my first book, Scatology and Civility in the English-Canadian Novel (University of Toronto Press), a study of the relations between the body and the text.

My research interests have always centred around contemporary literature, especially the connections between world and text.  I’ve published articles on science fiction, Canadian poetry, and on the complex relations between history and fiction in such novelists as Margaret Sweatman, David Williams, and Guy Vanderhaeghe.  In an article on literary theory and the novel, I argued that the depiction of the body in novels ties very directly into the kinds of juridical narratives implied in the Canadian Charter of Rights and Liberties.

But it wasn’t until Tom Mitchell and I collaborated on a second book, Walk Towards the Gallows (Oxford University Press), that I realized the pleasures of writing biography. Recounting the life of Hilda Blake, a Brandon servant who murdered her employer’s wife 100 years ago, we realized that in a biography one could work through the complex social and literary threads of a particular era while still telling a good story.

Richler’s life was certainly a good story, full of incident and battle. He defied his Orthodox Jewish grandfather, suffered a tortured relationship with his mother, was sexually initiated early, and escaped to the Spanish island of Ibiza, where he joined in drunken parties with the local fishermen and prostitutes, eventually landing in jail. At the same time his life and writing touch on many of the cultural flashpoints of the 20th Century. On Ibiza, his confrontation with a Nazi colonel spurred him to write about the Holocaust and also about Canadian anti-Semitism. In France during the 1950s, he hung around with Terry Southern (Dr. Strangelove, Easy Rider) and other American hipsters who helped determine the shape of the 1960s counter-culture. In London, he took part in the demonstrations during the Suez Crisis, protesting the British Conservative government’s intervention in the Middle East even as he and other Leftists grew disillusioned with the way that the Soviets were crushing the Hungarian Revolution. Returning to Canada, he entered the battle between Parti Québécois separatists and Montreal’s Anglo minority.

All of this and much else besides found its way into his brilliant novels. I spent 4 months at the University of Calgary in 1999 and 2003, going through the 265 boxes of the Richler archives. Several weeks before he died in 2001, Richler gave me permission to speak to his friends and family, and to quote from the letters and manuscripts in his archives even though he had often declared a very visceral objection to literary biography. No doubt he was defensive because so much of his best work was pulled, still bleeding, from real life — which is precisely what makes literary biography so interesting.

After that I completed the biography of Richler, Tom Mitchell and I collaborated again, this time on a book about the shadowy Citizens’ Committee of 1000, which in 1919 managed to bring the federal government and about 30,000 Winnipeg workers to heel.  Tom had been working on this project for some years and realized that the Citizens’ prosecution of the Strike leaders took place outside of the available legal avenues.  Because of the release (under the Access to Information Act) of correspondence between Acting Minister of Justice Arthur Meighen and the Citizens’ little general A.J. Andrews, we were able to tell the true story of how the Citizens steered the federal government to suppress the Winnipeg General Strike.  When the State Trembled: How A.J. Andrews and the Citizens’ Committee Broke the Winnipeg General Strike (University of Toronto Press) was published in 2010.

Of late, I’ve begun research for a book on postmodern culture, an attempt to assess the relations between the way we behave nowadays and the reflection of that (or not) in literature and film.  Because a number of scholars have (mistakenly, I think) argued that postmodernism is “over,” the project’s working title is The Second Life of Postmodernism.