Junction of the Souris and Assiniboine, fall 2017. Courtesy Street Media

Since 2012, I have been  University Archivist (Emeritus) at Brandon University. In practical terms, I am now an independent researcher, writer, documentary producer with many interests – traditional historical and archival practice included – that tend to converge on public history.

The digital revolution has furnished a new terrain for public history and given a new urgency to the need to come to terms with its epistemological nature and practice. I spend lots of time thinking about that, though the ontological nature of self and narrative – postmodern matters – is demanding more attention lately. 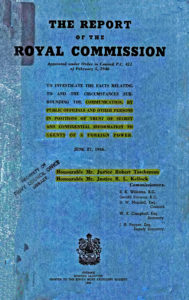 The front cover of the Kellock Taschereau Inquiry Report July 1946.

These days, I am working on two projects. The first concerns the history and legal character of Canadian public inquiries. One paper – Strike or Revolution – Hugh Robson’s Inquiry into the Winnipeg General Strike – has appeared (Manitoba Law Journal). A second, dealing with the origins of Canada’s first Inquiries Act (1846), can be found in the Journal of Canadian Studies (53.3.2021) . An examination of the place of the Mathers (1915) inquiry – Manitoba Legislative Building corruption  and the fall of the Roblin government – in the history of Canadian executive inquiries was published recently in the Manitoba Law Journal.

Research into the probe of Russian espionage in Canada c. 1946, and the idioms or paradigmatic models of political discourse deployed by participants in this crisis, including those brought before the inquiry for interrogation (mostly committed fellow travelers caught up in a GRU espionage net) to legitimize state actions and in turn to criticize the same has turned into a book length project.

It seems to me that in their celebratory account of the power and authority of Canadian coercive inquiries, the final report of the commissioners constitutes an apotheosis – a glorification, an exaltation – of a particular practice of state power in Canada and signals a decisive point in the historical development of coercive inquiries in Canada.

The second project involves journals composed independently by Hudson’s Bay Company men Donald McKay, John Sutherland, and Nor’ Wester John McDonnell, while traveling up the Assiniboine River in 1793. In these journals, a new non-Indigenous account of the eastern prairies appears shaped by subjectivities each with distinct understandings of time, space, landscape, and social order. I hope to use these journals (and related sources) to mediate a dialogue on the imaginative past, present and future of the eastern prairies and the Assiniboine River that surround the historic site of Brandon House #1 (1793-1811), and to lay a foundation for its restoration as a place of contemporary significance on the southeastern prairies. 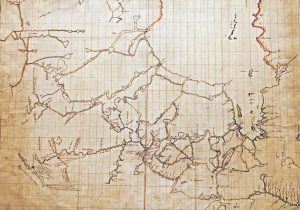