In the Archives is a series of five short documentaries concerned with the power of archival materials – photographs and  text – to evoke historical memory and a sense of place and time. (2018, 53 min.) Currently available to subscribers of BellMTS Television on Vibe Channel, see Favorites. 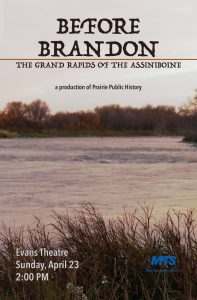 Before Brandon – The Grand Rapids of the Assiniboine

Before Brandon: The Grand Rapids of the Assiniboine is a feature documentary account of a vital geographical site in the history of the eastern prairies that has been lost to contemporary historical memory. (2017, 40 min.) (To view follow link above, password rapids.) 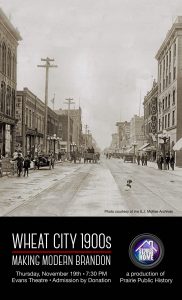 This feature documentary portrays the impact on Brandon of Edwardian era economic expansion triggered by renewed western settlement, technological innovation in communication and transportation, and what historians have termed the second industrial revolution. In the years 1900-1913 theses forces transformed Brandon ushering in a modern city with a complex social structure replete with the tensions of gender, class, and ethnic division. (2015, 68 min.) 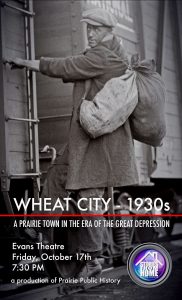 This feature documentary portrays the experience of Brandonites and their institutional leaders in an era of local, national and international crisis wrought by the  circumstances of the Great Depression. The crisis pushed the city to the brink of bankruptcy, left many dependent on municipal authorities for survival, forced the reconstitution of Brandon College, and galvanized the town’s political life around issues of survival individual and corporate. (2014, 48 min.) 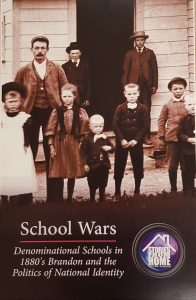 School Wars – Denominational Schools in 1880’s Brandon and the Politics of National Identity.

This feature documentary portrays the crucial role the political and religious climate of late 19th century Brandon played in the removal of funding for Catholic and Protestant denominational schools, and the establishment of a tax-supported, non-sectarian “national” public school system in Manitoba that triggered the historic Manitoba Schools Question. ( 2013, 45 min.)